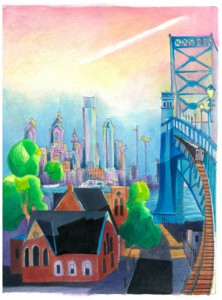 The exhibition project Visions of Camden explores this way of looking at Camden, its past, its present, and its possible future through the filter of lenses turned fleetingly on different times. Taking the impressionistic vision as a metaphor, the exhibition offers other visual mediums that have captured the transient at different moments in their technological development. Glass slides, photographs, prints, and digital montages of time-based photography are complemented by other two-dimensional renderings of space and time: maps, postcards and posters that introduce various ways of representing what a city might have been and what it might become. Prying open the ways of knowing—and supplementing the way of knowing offered through visual representations—objects from the city’s history act as windows to the past from which they have been conserved; the glimpses through these windows are also impressionistic in that they cannot provide a complete picture of what was.

From its origins as a ferry landing in the eighteenth century, Camden—named after Charles Pratt, Earl of Camden, an English supporter of constitutional rights for Americans, by Jacob Cooper, a Philadelphia merchant who in 1764 purchased and developed a forty-acre site near where his grandfather William Cooper had settled a century earlier—grew into an industrial powerhouse, the home to well-known enterprises, including RCA Victor and the Campbell Soup Company. Like many northeastern cities, Camden suffered the decline of industry and the departure of many residents to the suburbs following World War II. Today the city and its people, its residents and those who work in the city, are rebuilding a base of educational and medical institutions and strengthening existing neighborhoods. The Stedman Gallery’s exhibition proposes ways of envisioning moments in the history of the city: through the eyes of visual artists whose manipulation of color and form often return magic to the cityscape; and through the more realistic and unforgiving eyes of the photographer’s camera. Artifacts from the city’s residential and industrial history, including discoveries from the site of the new Rutgers-Camden dormitory on Cooper Street, propose glimpses into the domestic life of early, mostly anonymous, residents; the stained-glass Nipper that identified the RCA Victor tower, remounted for this exhibit, signals an enduring icon of the past. Through the visual and the material to the knowledge and methodology of academic disciplines, inspired by the art and artifacts on exhibit, community members, historians, archaeologists, and urban policy scholars offer and invite insights into the city’s past and its prospects.

This exhibition is a collaboration between the Stedman Gallery (Rutgers-Camden Center for the Arts) and MARCH (Mid-Atlantic Regional Center for the Humanities).

News Coverage for Visions of Camden: