The Rutgers–Camden Center for the Arts provides performances, exhibitions, education programs, and community projects that inspire a full appreciation and enjoyment of the arts, create meaningful opportunities to participate in the arts, advance the central role of the arts in pre K-12 education, and increase awareness of the arts as essential to cultural, economic, and community vitality.

RCCA, as part of Rutgers, The State University of New Jersey, is committed to making diversity a way of University life, where all members of the University community feel welcome, valued and respected.

RCCA is a public service unit of the Rutgers–Camden Campus, formed in 1997 to consolidate the established programs of the Stedman Gallery (1975) and the emerging programs of the Gordon Theater and Black Box Studio (1995). RCCA’s exhibition, performance, pre K-12 education, and community arts programs have evolved in response to external factors and the needs of our targeted constituencies. RCCA’s service region is primarily the area within a 50-mile radius of Camden, including southern and central New Jersey, southeastern Pennsylvania, and northern Delaware, which has a total population of more than five million.

The program, established in 1991, is based on the belief that educating teachers is an essential component of any effort designed to increase the artistic literacy of young people. The Kennedy Center’s extensive experience with its local professional development program for teachers provides the basis for this national program.

Partnership Teams consist of a member of an arts organization and a senior level administrator of a neighboring school system. The team participates in an Institute that provides models and planning strategies for establishing or expanding professional development programs in the arts for all teachers, follow-up consultation, and annual meetings to assist teams in their continued development.

The Rutgers-Camden Center for the Arts is a Major Presenting Organization/Major Arts Organization of New Jersey designated by the New Jersey State Council on the Arts.

The Rutgers–Camden Center for the Arts has been designated a Major Arts Organization of New Jersey by the New Jersey State Council on the Arts/Department of State. 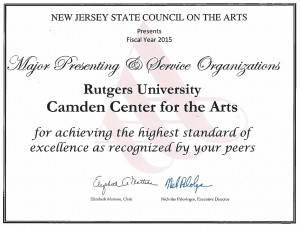 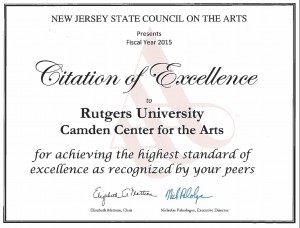 In January 2011, Associate Director of Education Noreen Scott Garrity received the Hometown Hero Award from the Campbell Soup Foundation in recognition of her significant contributions to improving the lives of Camden’s youth.