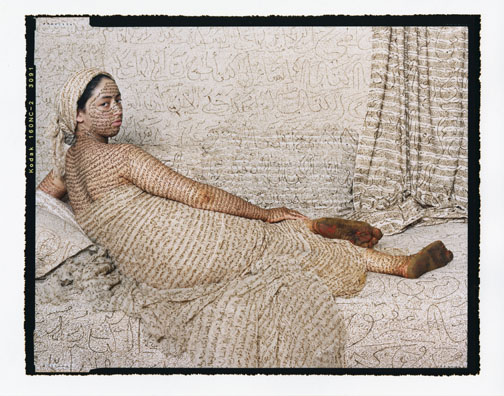 This exhibit proposes two streams, ornament and narrative, that animate the work of the participating artists. Strictures against figurative representation have been, to varying degrees and at different moments in history, a part of Muslim, Christian and Jewish cultures and societies. This proscription against the figure has given birth to a culture of the ornament, to the development of intricate geometric and organic patterns, often wedded to a bold use of color, that has characterized the fine and applied arts, architectural details, and the embellishment of printed works.  There have been, of course, less strict interpretations of the injunction against the representation of the figure that have allowed for non-religious figures set in secular narratives. Each of the artists selected has transformed one or both of these traditional approaches with a modernizing touch that delights the viewer in presenting a tradition transformed in a visually engaging image, and which contributes to a deepened understanding of the culture from which they emerge.

Soody Sharifi’s work in this exhibit, selected from her Persian Delights series, has introduced a saturated monochromatic background to figures engaged in a daily activity; the clothing of the figures or the objects with which they are engaged are imprinted with a rich and engaging pattern, establishing a contrast with the emphatic color field.

Roya Akhavan’s paintings from her Nexus series propose richly layered intertwining figures and motifs, recalling the interlaced ornaments of earlier historic moments, but approached by the artist in a much more lyrical way. The relationship between figure and ground is rendered in a much more complex way and the traditional approach to symmetry is thrown slightly off-balance.

Mitra Trabizian’s film work The Predator tackles the tensions of contemporary life in the diaspora, using English as thelingua franca of its protagonists drawn from different North African and Middle Eastern countries that do not share a common language. The film also tackles perceptions that the West projects onto the East, a hold over from the Orientalism of the 19th century, augmented in the recent clashes of cultures.

Siona Benjamin’s installations and paintings draw on traditional images, cultural references and styles from her Indian Jewish heritage,  transformed through her own unique, contemporary pop cultural sensibility. The work presented here , with its rich synthesis of seemingly disparate elements from her rich multi-cultural background, and elements of both her old, and new worlds, includes her large installation “Lilith in the New World,” and several recent “Improvisations.”

Lalla Essaydi, who transgresses many gender-based strictures of Muslim culture in her work,  creates complex, exquisitely-detailed photographic tableaux that reference, destabilize and transform stereotypical images, with many drawn from 19th century Orientalist paintings,  of the “exotic” Middle-Eastern woman. In her work, she carefully poses her women subjects in traditional Muslim dress, covers all surfaces with a personal calligraphic text written in henna, and then creates large-scale color photographs that challenge our preconceptions and reframe our vision.

Shahar Yaholom, an Israeli artist now working in New York, creates dream-like, fantasy images and objects in a variety of media. Her drawings, such as those exhibited here, bring together gothic, mythical, landscape and aquatic images to create emotionally-evocative, multi-latered narratives.

Ornament and Narrative is presented by Rutgers-Camden Center for the Arts in conjunction with The Fertile Crescent: Gender, Art, and Society, a program of Rutgers Institute for Women and Art (iwa.rutgers.edu) www.fertile-crescent.org.