And all my days are trances,
And all my nightly dreams
Are where thy dark eye glances,
And where thy footstep gleams —
In what ethereal dances,
By what eternal streams.

Edgar Allan Poe, excerpt from To One In Paradise 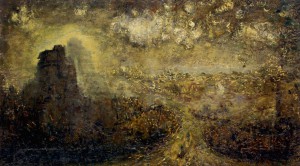 Although the period formally known as Romanticism waned around the middle of the 19th century, almost all 20th century art is rooted in the individualism of the Romantic tradition, an impulse that continues into the 21st century as a viable current. Among the many aspects of Romanticism that survive are: primitivism, love of nature, interest in the past, mysticism, subjectivity, and a reaction against modern civilization and the nefarious effects of its industry and technology.

The artists in Dark Eye Glances adapt elements of Romanticism to the times in which they live. Twelve artists were selected for this exhibition; eight are painters, two “painterly” photographers, a printmaker, and a mixed media artist. We decided early in the curatorial process on landscape, being a traditional theme of romanticism. We were continually drawn to aspects of these artists’ paintings and other works that we always loved and continue to respond to as artists and curators: textured, seductive surfaces; ambiguity of place and space; and landscapes, evocative of time past, and of both known and unseen worlds.